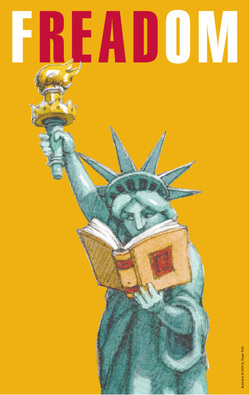 Censorship involves the suppression of words, images, or ideas that are considered to be "offensive" to others.  When individuals or groups censor, they are attempting to control the information and ideas that are circulated within our society.  We often see censorship occurring when individuals succeed in imposing their personal political or moral values on others.  The United States upholds a firm commitment to our freedom of imagination and expression, which is supported by the First Amendment along with a lengthy list of past Supreme Court decisions.  The Supreme Court has interpreted the First Amendment's protection of artistic expression very broadly.  This protection extends not only to books, theatrical works, and paintings, but also to posters, television, music videos, and comics - essentially anything an individual's creative impulses can produce.

Censorship takes many forms in our country.  We witness it through the outright banning of books and information, to more subtle versions of persuasion.  Despite the importance our country places on freedom of thought and freedom of speech, there have been countless efforts to limit these freedoms throughout our nation's history.  The American Library Association defines intellectual freedom as "the right of every individual to both seek and receive information from all points of view without restriction."  In other words, all people deserve free access to any expression of ideas and the multiple perspectives that may be explored.  Intellectual freedom encompasses the freedom to hold, receive, and disseminate ideas.  Visit the American Library Association link below for even more information concerning the relationship between censorship and intellectual freedom.
Intellectual Freedom and Censorship Q&A