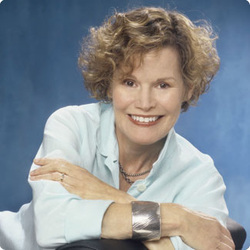 Judy Blume is a beloved author who has written countless books for young adults.  A few of the titles that adults as well as children will recognize include Are You There God? It's Me, Margaret, Forever, Blubber, and Just as Long as We're Together.  She has received multiple awards and honors for her work, including the Margaret A. Edwards Award for Lifetime Achievement in 1996, the Library of Congress Living Legends Award, and the 2004 National Book Foundation's Medal for Distinguished Contribution to American Letters.  As Mrs. Blume's career took off and her books became more successful, censors began to pay more attention to them.  Therefore, it comes as no surprise that Mrs. Blume is a longtime advocate of intellectual freedom as she has found herself at the center of many censorship attacks.  Over the years she has reached out to fellow writers, as well as teachers and librarians, and has worked tirelessly with the National Coalition Against Censorship to protect the freedom to read.  For more thoughts from Judy on the topic of censorship and ways that we can fight against it, visit her website Judy Blume Talks About Censorship.

Judy Blume discusses the effect that book censorship has on children