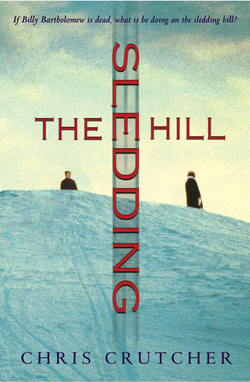 “Warren Peece is the first book I've ever read with . . . with characters who seem like they could be my friends.”


Plot Summary
Billy and Eddie are best friends, but when Billy accidentally kicks a pile of sheetrock that breaks his neck and kills him instantly, Eddie's life changes forever.  Within the first ten pages of the story, Eddie has lost both his best friend and his father to freak accidents and is left alone to deal with his grief.  Knowing how much emotional pain his friend is experiencing, Billy decides to hang around Earth for a little while longer — at least until Eddie is better able to cope with the incredible tragedy and loss he's experienced.  When Eddie begins reading Warren Peece in his English class, he finally finds some solace — which is abruptly taken away when the book is immediately challenged.  Through Billy Bartholomew and Eddie Proffit, Crutcher tells a moving tale that takes on censorship, control, school issues, religious issues — and he does it all using himself as an example by creating issue over a fictitious book he supposedly wrote.


Review Excerpts
"This clever, spirited post-modern meta-narrative is a quick read that is bound to be controversial. It has no profanity, sexual acts, drug or alcohol use, or bloody violence but takes dead aim at censors."
— School Library Journal, STARRED REVIEW

“This oft-censored author entertains, inspires, invites intellectual inquiry and concedes well-meaning motives to both sides . . . a lot to pack into a novel, but when did Crutcher ever pack light?"
— Kirkus Reviews, STARRED REVIEW

"... themes of senseless tragedy and intellectual freedom serve as a natural postscript to [Crutcher's] memoir, but this isn't nonfiction. In fact, it defies categorization, offering up a smorgasbord of literaty devices . . . elective mutism, a narrator from beyond the grave, and a plot in which the author himself plays a major role."
— Booklist

"Crutcher turns crusader in this story of a boy who has lost too much to let a book be taken away from him."
— The Bulletin of the Center for Children's Books