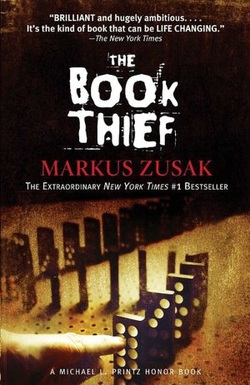 “When she came to write her story, she would wonder exactly when the books and the words started to mean not just something, but everything.”

Plot Summary
The Book Thief tells the story of a young German girl caught in the path of the advancing Nazi regime during World War II.  Liesel Meminger's story is told from the perspective of the Grim Reaper, the personification of death.  At times haunting and heartbreaking, readers will experience a wide range of emotions as they read about Liesel's family, friends, and enemies and the struggles, triumphs, and secrets they kept during a devastating war.  When Liesel goes to live with a foster family near Munich, she learns to read and begins stealing books.  These books become powerful characters in her life that bring solace to herself and others, and they contrast sharply against the destruction that the Nazi regime has wrought during this time in history.  Above all, this is a story of the beauty, celebration, and triumph of human life - even in the face of hatred and unspeakable horror.

Review Excerpts
"The Book Thief will be appreciated for Mr. Zusak's audacity, also on display in his earlier I Am the Messenger. It will be widely read and admired because it tells a story in which books become treasures. And because there's no arguing
with a sentiment like that."
— New York Times

"This hefty volume is an achievement . . . a challenging book in both length and subject . . . "
— Publisher's Weekly, STARRED REVIEW

"Exquisitely written and memorably populated, Zusak's poignant tribute to words, survival, and their curiously inevitable entwinement is a tour de force to be not just read but inhabited."
— The Horn Book Magazine, STARRED REVIEW

The Book Thief Receives a New Life on the Stage